Scales are probably the most common insect pest on orchids. There are at least 27 species of scale identified. They are classified as soft scale and hard scale. Fortunately, the hard scale is rarer on orchids but can be identified by its hard brown domes of the adult female.

Soft scale damages the plant by sucking sap from the plant. It also leaves behind a sticky excretion called honeydew. The hard scale does not leave this excretion. A large infestation of males will appear powdery and white. Adult females create larger scales that protect eggs.  Soft scale can be found along the underside of leaves, along the stem, and even in the roots and rhizomes. Cattleyas are particularly susceptible to a type of brown soft scale called Boisduval scale. Boisduval scale often appears on the undersides of leaves along the midribs and underneath the sheaths. The hard scale is rarer on orchids but can be identified by its hard brown domes of the adult female. 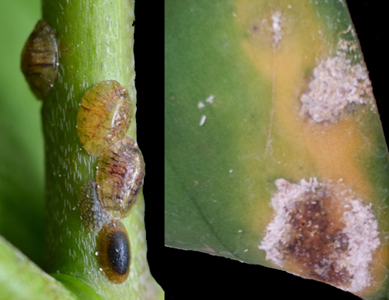 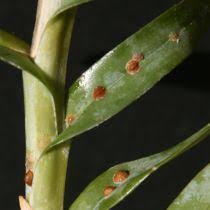 Treatment of all pest attack starts with the following:

When symptoms are detected, spraying with a pesticide such as the following are effective :